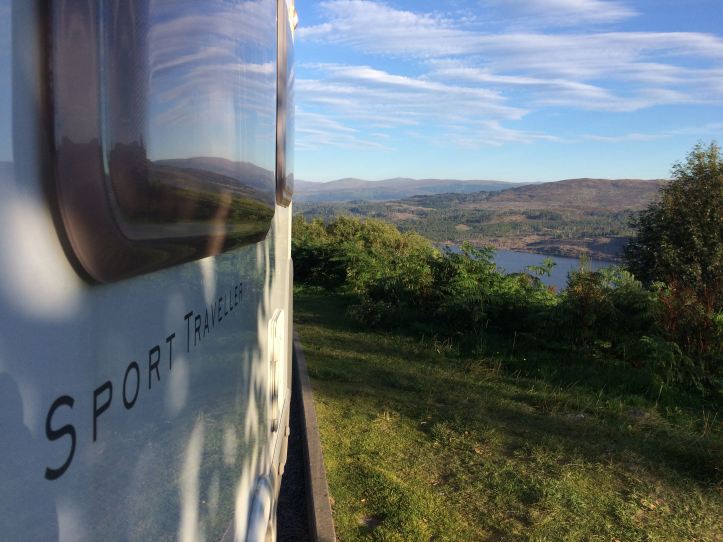 A clear blue sky greeted our awakening at 7:50 and although a mist clung to the loch surface it was obvious that this would clear as we busied ourselves with preparations for a day’s fishing and a swiftly served bowl of porridge. By 9 o’clock we were camped at the side of Loch Ederline with two rods out with deadbait and two others rigged with lures plus a brace of fly rods for good measure.

The lake surface mirrored the surrounding scenic beauty with the mist disappearing as predicted and the warm sun keeping our spirits and expectations up. Having bailed one of three available boats we loaded all the gear in and set off to fish the nearby bay en route to the backwaters.

We enjoyed a busy day with a combination of dead bait and lures bagging a total of six Pike, jacks of various sizes as well as hooking and losing five others so the day certainly proved productive and exciting although I’m not the best at unhooking the blighters.

Thankfully all were returned alive and intact with only one broken rod tip amidst the melee. The last two fish of the day were caught where we’d started – bankside at the reed bed, falling to mackerel deadbaits as we dozed in the evening sunshine in our Lakeside chairs – and these were the largest of our haul, each probably around 4-5 pounds – and not quite the 34 pound monster which had been caught here 20 years previous.

So with the sun beginning to set, we packed up and tramped back across the field to reload and prepare the van for its onward journey. A brief farewell to Nettle the pet roe deer, as it grazed nonchalantly in the front garden of The Big House and then off again onto the main road heading in the direction of Oban.

Well whaddya know? Another scenic road led us away from Ederline and skirted the coast with positively Norwegian views across inlets and twiddly bits all backed by craggy moorland and hills illuminated by the lowering sun to cast long shadows and crisply highlight the gable-ends of west-facing farmhouses.

Without any real plan other than to keep travelling until we found somewhere wild to stop we sailed past a “P”-marked off-road layby with another intricately fascinating view out to islands and headland, so turned the van and headed back to find it to be sheltered, grassed and sea-edge picnic spot complete with wooden benches and an awe-inspiring view of the sunset.

Beer, cigars and Holly’s gifted Indian incense sticks were swiftly deployed along with an appetiser of crisps and pretzels as we sat (in our coats!) to watch the clouds turn to a blazing carmine orange split by strips of deep blue as the sun inflamed the sky. While we watched, an imaginary landscape of lowland islands formed – individual clouds sitting on the horizon and extending our view over a false and sunlit vista.

Agreeing it was probably the best sunset either of us had ever seen we returned to the van to prepare a hot meal comprising some rather interesting meat slice which was clearly a local staple and appeared to combine minimal minced steak (of lowly provenance) with a haggis style pudding (might be Lorne sausage?) but all made palatable with mustard, new potatoes, mayonnaise, sautéed leeks (in basil-infused olive oil, no less!) accompanied by fresh pea-shoot and watercress salad – all of which went down very well, especially as the hot-water had been turned-on prior to dinner, enabling us to take long overdue on-board showers for which the water supply (and the heat) held out long enough for each of us to emerge clean and glowing for a whisky nightcap, a spot of iPad Solitaire, washing-up and Journal catching-up.

Premature, I know, but after the fresh air and fishing activity throughout the day we had to stave off retiring to bed at 9:30 PM with a delightfully rewarding day behind us.