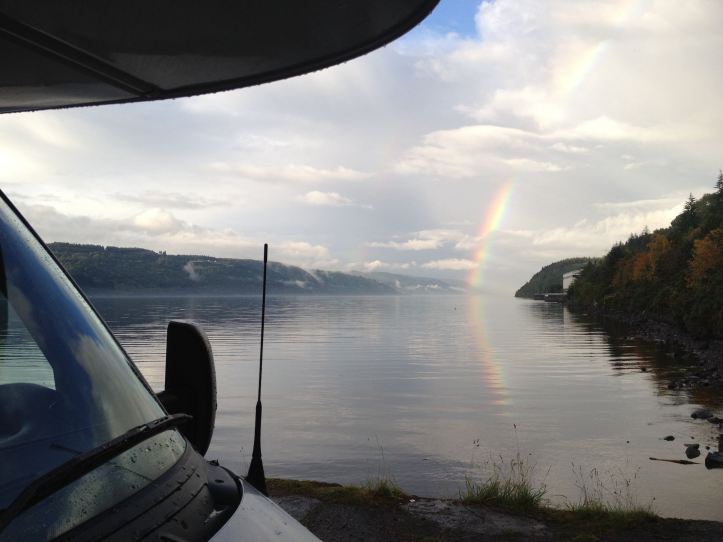 Despite our overnight location it was peaceful enough for a relaxed start to the day, apart from the amplified sound of rain on the roof so, having had a lightweight breakfast, we set off towards Inverness anticipating an opportunity to visit a large and cosmopolitan Scottish city. In fairness, the increasingly heavy rain didn’t help its cause as we arrived under low grey cloud and a steady downpour which made our thoughts of a mooch around and elevenses in a café very difficult to realise.

Parking the van was problematical and the modern Eastgate Shopping Centre – despite being a covered mall – didn’t really appeal so while we dithered we drove, to find ourselves popping out on the other side of town, where, turning around to give it a second chance, we came across a large kitchen, home and hardware store on the outskirts with an adjacent car-park.

Having previously determined to treat ourselves to a new salt-and-pepper set for the van as our anniversary present – and being unable to fulfil that desire in Ullapool (a town sadly devoid of cruet retailers) – we took a chance, parked up and popped in. Indifferent sales staff had to be asked for a bag in which to place our newly purchased acquisitions and that was the sum total of our experience of Inverness as we legged back to the van to escape the still-plummeting rain.

Onwards then and, despite the weather, our spirits lifted as we returned into scenic Scotland, heading out towards and along the southern shore of Loch Ness on a narrow road with the lining trees colouring nicely to provide an autumnal backdrop. We headed towards Foyers, where a Club campsite offered facilities and services on the shore of the legendary Loch. Arriving well in advance of the 2 PM check-in time, we were nevertheless welcomed warmly by the English wardens (this having been the surprising norm throughout our trip) and were able to park-up, plug-in and settle down offsite for the brunch we had promised ourselves since awakening that morning, fugging up the rain-streaked windows even more with a full-blown Scottish breakfast complete with black pudding and haggis. Time quickly passed and at 2pm the campsite barrier was raised and we trundled to our pre-selected spot with a view of the Loch through the still pouring rain.

Local advice had suggested a spot of fishing could be had from Foyers Pier, a short walk down the Loch-side so we naïvely loaded ourselves up with tackle and, suitably waterproofed, set off on foot to get lost around the Loch edge, striking inland to navigate a static river and after a fair trek along a tarmac track past a huge and fascinatingly incongruous former aluminium factory (and now seemingly part of a hydro electric generating station) we found ourselves on a disused wharf overlooking Loch Ness, with low cloud clinging to the woodland on the far shore and intermittent sun and rain providing scenic contrast up and down the Loch.

Using every conceivable fishing method, we failed to entice anything from the deep black waters at our feet and – given the good quality of the access road – I returned on foot to the campsite to retrieve the van which we were then able to park up on the jetty. Welcome cups of tea sustained us, along with an intermittent rainbow, while we continued to fail to catch anything. The afternoon wore on, boats idled past on the far side of the loch until we eventually decided to call it a day and headed back to our pitch, being slightly bemused by the sighting of a small bird which flew past us low across the water then landed in the margins and immediately sank from view.

The campsite facilities included an excellent laundry so we availed as evening fell; we found elusive TV signal and enjoyed in-van hot showers before retiring for Bloody Marys; a very exotic ostrich steak (impulse bought on an earlier grocery shop); a glass or two of wine to accompany an episode of Lewis on the TV; a spot of journal noting and then bed, thank you.