We Reach San Sebastián. (Part One) 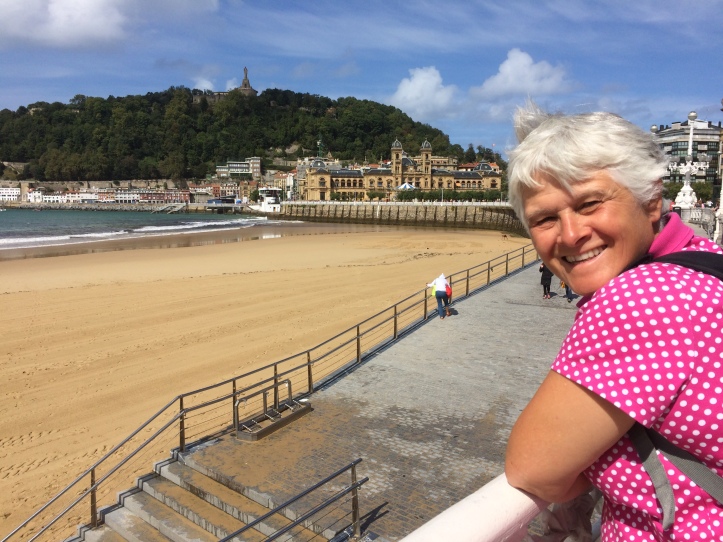 ” . . . And this Tourist Guide booklet, in English, is just one euro, gracias”
This smiling conclusion to our second engagement of the day with a native of San Sebastián ended well, we felt. The smiling tourist officer had explained the city’s layout with the aid of one of those big, tear-off-a-big-jotter-pad of street-maps – on which she’d biro’d salient points of interest (upside-down of course – they’re always upside-down) and then in conclusion offered us a glossy little booklet, from which I’ve been able to elicit some interesting facts about the city we had chosen as the turn-for-home destination of our trip.
I say ‘second engagement of the day’ because our first was the best introduction to a city that a visitor could expect: it rained heavily. And as a result of this unexpected turn of events (The Part Time Weather Girl had designated that afternoon to be one of bright sunshine), we found ourselves hurriedly taking shelter in La Perla, a chic bar/restaurant, embedded in San Sebastián’s elegant Promenade and apparently part of a Thalassotherapy-Sports seawater treatment centre which – and I quote – ‘was one of the most important spas in the world in its day.’
Our slightly damp and disarrayed arrival was greeted by a smiling and welcoming barman with a knowing, expansive gesture over an array of tapas which left us staring boggle-eyed, as if we’d just penetrated the innermost hallows of Tutenkhamen’s tomb. As it turned out, this array of delicacies was a shallow representation of what we were to discover later, but at the time, it represented shelter from the rain as well as an impromptu lunch, as a small selection of delicacies was washed down with a couple of welcome beers, with the van now staying well and truly put until the next morning.
And while we discovered the culinary delights of tapas, the rain eased off and the sun did indeed emerge as predicted, with almost enough warmth to steam the pavements dry as we sauntered from our baptism back onto the Promenade.
We continued our saunter towards the old town area, while technology was quietly shadowing our every step, in the form of a little electronic device worn by The Navigator, which would later report that we had completed over 22,000 paces during our visit – accounting for over two day’s worth at normal expectation so as we walked we were mentally gearing ourselves up for a blow-out dinner of Beano-esque proportions later that day.
As it was, we just kept walking. The lure of the wild Atlantic led us through the port area, past the Aquarium and out around Mount Urgull, a rocky outcrop which served as part breakwater and shelter to the port area, topped by an imposing stone statue of Christ Not-Quite-The-Redeemer, but a passable impersonation, nonetheless.
This ‘New Promenade’ allowed us a bird’s-eye view of the Atlantic waves breaking over rocks below us, foaming with such a viscous and vivid whiteness that it looked as if vast cauldrons of uncooked meringue were being churned beneath our feet.
This unplanned walkabout provided us with views of Lurriola – the third beach in San Sebastián’s triumvirate of surfing, overlooked across a haphazard dumping of massive, motorhome-sized cuboid chunks of breakwater slate, then led us gently back into the Old Town again.
Here we enjoyed a stroll through a narrow and engaging network of street-bars, cafes, restaurants and shops, just busy enough to impart a true holiday atmosphere without being overwhelming. An old-world, brightly-lit and fantastically-stocked tobacconist on a corner drew us in with its cabinets of cigars and undisguised array of cigarettes, appearing positively defiant in its full-frontal and unashamed exposure of the leaf-that-shall-no-longer-be-named.
The more bars we passed, the more their epic displays of tapas became a form of food-pornography, until one in particular – Taberna Aralar – caught our eye, with chandeliers of smoked ham joints providing a perfect foil to the abstract visual chaos of every conceivable bite-sized foodstuff in every conceivable colour of an abstract artist’s palette. Old, tobacco-stained wood lined the bar, the floor and the walls; the clientele was bustling, colourful and noisy and we decided – without a word passing between us – this should be our dining destination later in the evening.