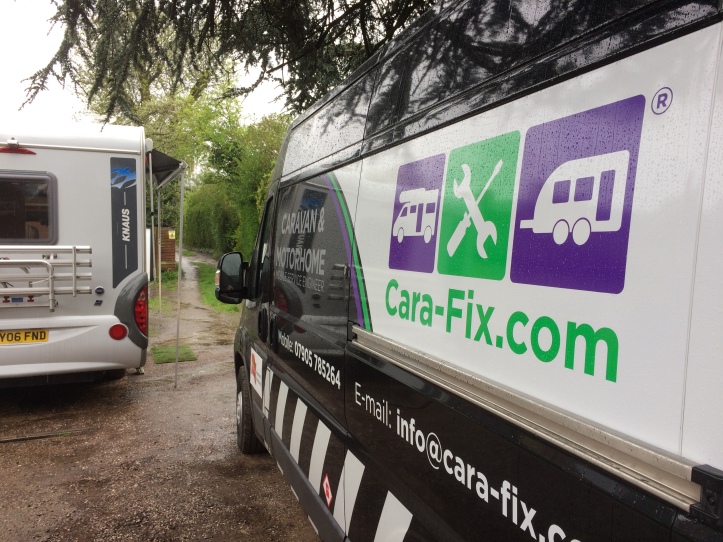 The annual Spring Ritual of Resurrection, performed on our sleepy and slightly bewildered Knaus Sport Traveller as we prepared it for our forthcoming European Odyssey, has become mired in a series of technical complexities equivalent in perceived scale to the launch of a manned flight to Jupiter.

Hoping for a comfortably functional round-trip, we felt that our wheezing onboard fridge should really be fixed before we blasted off from Launch Pad LichVegas. Similarly, our submersible (sorry, technical jargon creeping in there) water-pump had never quite performed to its full potential since it was replaced under duress in France last year, so that needed attention too.

And while I’m lying on my back under the van trying to check the condition of the spare wheel – and how one might actually access it should the need arise, it is noticed that careless reversing into objects-unknown has smashed the rotating waste-water downpipe, so that could also do with repair to make sure we’re completely ship-shape before Mission Control commences the ignition countdown.

These primary technical problems were, in the main, beyond our limited in-house DIY capabilities, so a trawl of t’internet threw up a surprisingly helpful site – the MCEA (Mobile Caravan Engineers Association) which proved instrumental in guiding a shining white knight down the narrow lane at the back of our house to attend to the needs of our malingering Knaus.

Yet I’m slipping the handbrake on the story here and rolling ahead of myself, as it wasn’t all plain sailing prior to this act of mobile salvation.

During our initial search for solutions, we’d become frequently confronted (and frustrated to distraction) by the stock-response to every question we posed in relation to our problems, which was – without exception – preceded by the caveat . . . “It depends.”
It depends on your voltage at the faulty unit; it depends on your leisure-battery discharge rate; it depends if you’re hooked-up (another technical term) to mains electricity; it depends on the bore of your pipework; on the 12volt supply; on the phase of the moon; on your tyre pressures; on which way the wind’s blowing; on the capacity of your water-tank; on your height above sea-level; on your mother’s maiden-name; on the alignment of the planets (including bloody Jupiter); if the engine’s running; on your fuse-ratings; whether the capacitor on the Ouija board is drawing more than 80 dubrifirkins . . . and so on and on and on.

Alas then, no ideal solutions from the online cognoscenti – and thus – into a geo-stationary orbit alongside Knaus – arrives our Real And Redeeming Mobile Caravan Engineer in an enviably well-equipped, shiny black Transit Van, tastefully liveried with the name Cara-Fix Midlands Ltd (there’s your plug, Mark) along its gleaming flanks.

With refreshingly little in the way of chin-stroking or head-scratching, the fridge was quickly assessed and then carefully and multiply-disconnected, every stage being photographed to ensure correct re-assembly. It was then eased gently out of its snug cocoon; extracted through the window, as there was no way it’d go out through the door (do they build these vans around their innards, I wonder?) and taken carefully away – cocooned in a blanket like a shameful prisoner, to be diligently and rigorously interrogated during a semi-distant bench-test.

Side-by-side like comrades-in arms, we then peered cautiously into the water-tank, half expecting a lurking enemy to emerge, which I guess it did, in the form of the water-pump which (in its ailing and decrepit state) was no match for the likes of us, even though our knees, backs and an elbow or two were creaking from our cramped communion with it.

And lo, a few days later, the fridge is triumphantly returned, its complex 3-way power-sources (Gas, 240v and 12v) having been fully checked and pronounced working. And if it worked under interrogation, it’ll work in the van. Back through the window we go; gentle grunting eases it back into place and with hearts in mouths it’s rewired (via several inaccessible dubrifirkins) and powered up . . .

No green light, we do not have lift-off. No gleaming control-panel LED to denote success on the 12v front, but hey, 66% positive outcome gets my vote, especially as we had nil refrigerational functionality a week ago. (The cost of a new fridge would also have put a severe dent in our Galactic Exploration budget and would have delayed launch by as long as it took to acquire a replacement.)

Undaunted by this set-back, our specialist engineer had a solution. He knew a man. And that’s what I love about true professionals – they don’t feel compelled to suddenly become amateurs and therefore licensed to start tinkering in the outer hemispheres of their own experience. Unlike the author (who was unwilling to even admit to the waste-pipe damage caused by his own limited reversing capabilities) Mark knew a fellow astronaut – who had visited the mysterious planet of Twelve Volt more frequently; was therefore familiar with its geography – and would know the most effective route to a final solution.

The sub-space call was therefore made, an imploring message left, the call was returned and yes . . . you’re ahead of me already, because as I explained the situation and enquired if he could help, there are absolutely no prizes whatsoever for guessing his first response . . .