You Were Promised Trieste, You Shall Have Trieste. 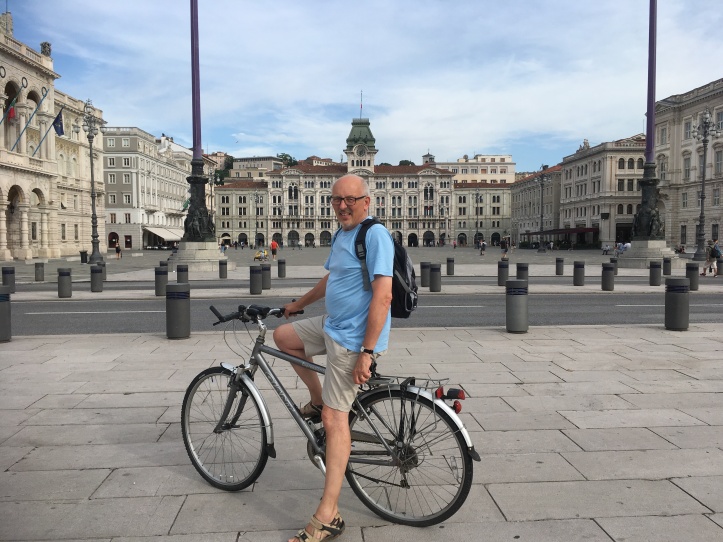 Prologue: Although the title of this piece may imply that the early stages of our rapid journey through France and Switzerland to Italy and onwards will go unremarked, I haven’t yet got round to writing those bits up, and if I wait to do so, my rapturous and (so far appreciative) audience of at least two of you will think I’ve fallen permanently asleep under the Montenegrin sun. So, again, please forgive the fragmentary timeline as you jump forward in time. Oh, with an added bit about Bergamo too, thrown in for free . . .

Our journey south to Montenegro really began in earnest at Trieste, which had long figured in our minds as the gateway to Adriatic Eastern Europe and which enjoyed a certain mystique in our household since the travel writer Jan Morris wrote a whole book on the city. Despite having read it, I’m now disappointed at my inability to recall any pertinent details whatsoever (and that’s more the fault of an ailing memory than any shortcoming on Jan Morris’s part. I think.)

So, into Trieste we drove, a little jaded from having left a surprisingly delightful overnight stop in Bergamo, from where we’d set ourselves a slightly over-ambitious autoroute schlep across half of the top of Italy. This journey was made almost perilously busy by convoys of commercial trucks, all inevitably travelling at the same speed as us and rudely buffeting our attempts at overtaking until most of them thankfully disappeared once we’d passed the Venice junction.

Backtracking briefly, our overnight stop in Bergamo, Italy had provided a pleasant surprise as it had been selected in the planning stage purely for its convenient location as an overnight staging post, with an ‘aire’ tucked unassumedly and slightly incongruously into the outskirts of the business district. Not expecting much, we were warmly greeted by a young receptionist who politely enquired which language we’d like to be welcomed in. The simple fenced site – with a total capacity of about 25 vans – quickly grew on us, especially as we found ourselves accidentally within cycling distance of Bergamo old town, an historic hill-built, medieval fortress-like settlement boasting Roman roots.

To add to its sense of newly discovered novelty, we were also made aware (in continuing and impeccably spoken English, of course) that a funicular railway carried visitors up to the old higher town, so after a brisk and excited cycle ride, we joined a small group of intrepid funiculeers to make our way upwards in a small, modern, twin-height, standing-room-only single railway carriage to emerge onto narrow, sun-dappled cobbled streets bustling with early-evening nightlife.

A gelato to fortify us in the Cittadella Square, then a good old mooch around attractively aged and shuttered buildings, tall and domineering, with the occasional resident peering benignly down upon us lowly, gawping tourists. After a gentle perambulation and views of Greater Bergamo below us, a corner bar caught our attention, where we enjoyed refreshments including a local pasta dish along with octopus and potatoes, which did exactly what it said on the tin.

Back down the funicular in the dusk (this being Italy, no timetable information available anywhere, so no idea what time the last ‘train’ departed) and an exhilarating downhill cycle back to the campsite, for a nightcap and bed at a decent hour.

So, yes, eventually, Trieste. Our arrival was made more dramatic with a tympanic thunderstorm accompaniment, coupled with an approach route which descended steeply via a series of hairpin bends running through suburbia, so the houses and apartments seemed to be clinging to the edge of the storm-slicked tarmac, each gasping for breath under streamingly heavy rainfall. Thankfully, we found ourselves in a small convoy led by a passenger bus and our now trusty satnav glowed reassuringly from the windscreen, so we found ourselves safely guided to sea-level at the City’s tidy little marina. Here we found a front-line already populated by a range of motorhomes interesting for both their collective ages and scale, amidst which we shouldered our middling way in to claim a pitch for the night, despite the signage which threatened we’d be towed away after 9pm.

The thunderstorm passed, the pavements steamed as the evening sun quickly warmed them again, so we unhooked the bikes and cycled about 3km along the main road into the waterfront centre of Trieste. Imposing civic buildings – both old and new – presented a grand and pleasing prospect as we cycled onto the large main square and into the hinterland, finding well-earned refreshment at a waterside café-bar, where, amongst other delightful misunderstandings, we were served glasses of Hoegaarden beer in glasses so large we needed both hands to lift them.

A dusky return to our peaceful, waterfront pitch ensued – with an overnight accompanied by the lulling sounds of halyards gently tapping against yacht-masts – and thankfully no winch-clanking intrusion from the City council’s tow-truck.