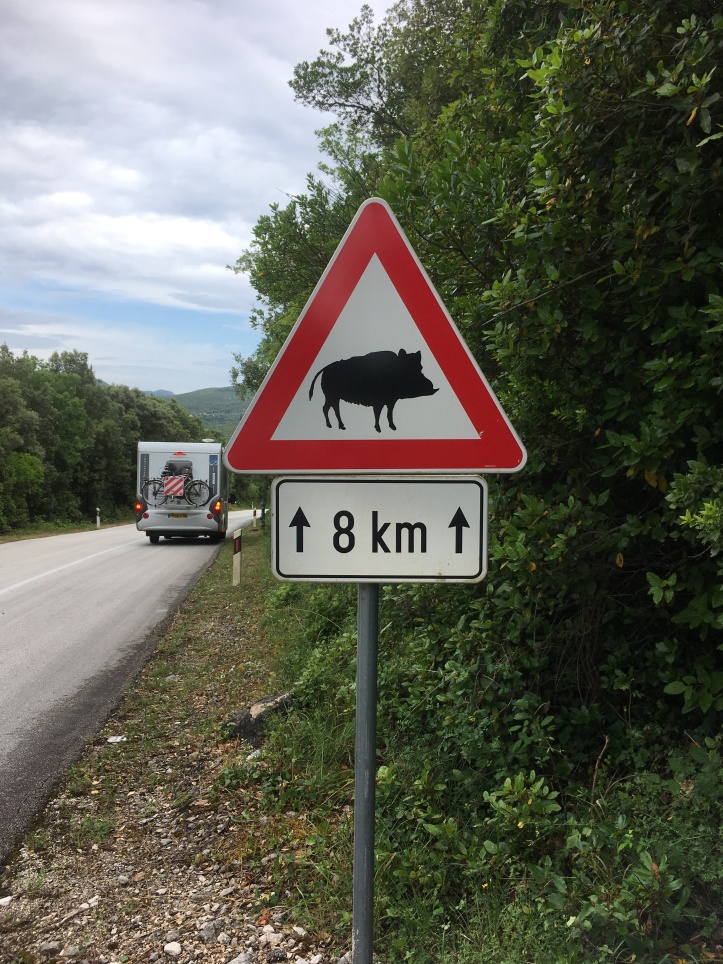 Most of Croatia is behind us, its amazing coastline almost totally consumed by our rolling tyres and aging but unfaltering Fiat Ducato 2.3 litre diesel engine lugging 3.5 tonnes of wallowing motorhome behind it.

Here, at Croatia’s southernmost finger, neighbouring Bosnia-Herzogovina is separated from the sea by a tantalisingly thin crust of land, almost as if it had just had its picnic lunch and its Mummy wouldn’t allow it to go anywhere near the tantalisingly close Adriatic Ocean (for at least an hour) in case it got tummy-cramps.

It’s also interesting to note that almost all of Bosnia-Herzogovina is landlocked, apart from a tiny weeny little insignificant stretch of coastal frontage which can’t be more than 5km across, and with which they’ve done absolutely bugger-all. You’d have thought they’d have built a huge sea-port in order to access the trade routes of the world but not a bit of it. Just rolling green countryside; unspoilt natural coastline; a few scattered hotels and an endearing lack of commercial opportunism, which we have to wholeheartedly applaud.

The general topography didn’t really change as we headed towards Montengro (and why would it?) although one of the new, hitherto unseen and unusual road-signs – that of a wild boar (which we excitedly assumed would be wandering into our path anytime soon) – did tend to add a certain expectation to the continuing journey. (It didn’t, just in case you were wondering. We assume they’d all been spit-roasted in Slovenia.)

Instead, clusters of Italianate cypress trees spiked themselves skywards like a speleothem (liking that one, eh?) of pencil-thin, dark-green stalagmites – each straining upwards to give glorious, pointy-fingered praise to the cloudless blue sky. Orchestras of roadside cicadas continually shook their noisy maracas at us as we trundled by, so much so that the continual percussion became an intrinsic part of the general road noise filtering its way through our gloriously wide-open cab windows.

Our border crossings on the journey so far had been unremarkable, cursory affairs – and the roads had been traffic-free, so it was a slight shock to find ourselves joining a slow-moving queue of vehicles at the south-bound Croatian border. Although the passport check was eventually a brisk formality, we had to queue for about 20 minutes to pass through. Elated to be released into what we thought was Montenegro, our expectations were thrown again when a further queue appeared just around the next bend. Here, it appeared, was the Montenegrin border and the previous delay was simply to exit Croatia. If that was the case, we asked ourselves, were we now queueing in an indeterminate No Mans’ Land between the two countries? Lacking sufficient (for which read ‘any’) local language capability, we decided it best not to question this geopolitical fault line as we sat in another slow-moving queue to eventually reach an impassive, uniformed Border Guard sitting in his mirrored booth.

Passports seemed to be in order, but vehicle documentation was required. No? No good. Insurance? Green Card? That was the sum total of our grunted, almost primaeval communication and since we didn’t actually possess a Green Card (but instead could wave DVLA’s impressive-looking V5C document as proof of vehicle ownership) our passports were duly withheld and we were pointed peremptorily to another mirror-windowed booth. Now on foot, having parked the van in the holding area, a similarly impassive (and maybe just slightly grumpy) woman pointed us onwards to an industrial-looking office. Here, Slobodan Milosevic’s younger (and obviously smarter) brother sold us a scrappy piece of white paper (which was therefore neither green nor made of card) for the 20 euro note I was inadvertently holding – which may or may not have been the actual fee, who knows?

So, now in possession of an official Scrappy White Paper, we reclaimed our passports, boarded the van and did indeed and at last, pass into the land of Montenegro.

A now comparatively short hour’s journey to Kotor Bay, which has to be seen and experienced at first hand to be believed. Onerously described as a fjord, it is apparently a gulf (and don’t ask, as I can’t for the life of me recall what the distinction is) but it is very big and interestingly shapely. Impressively huge tree-clad and grey-topped mountains encircle the whole enclosed seawater bay – where the surface was as calm as a lake and the sun seemed to intensify as we trundled gently around the lengthy perimeter road. We spurned the ferry across the throat of the bay – which our beloved SatNav (almost as a last-ditch act of defiance) insisted was a road and carried on, the finishing line now almost in our sight.

Excitement mounted as we progressed towards our final destination, the small water’s-edge and therefore linear town of Dobrota, just west of Kotor – the main town which gave this beautiful bay / gulf / fjord (you decide) its name. It was just past noon on Sunday 10 June that we pulled up outside a modern-looking villa-with-sea-view, having added an impressive 1,723 miles to the trusty Knumptwagen’s mileometer since leaving home.

Our holiday rep – who greeted us on the steps – was clearly startled by our premature arrival in a bug-spattered, UK-plated motorhome which now must have resembled a giant, shop-soiled fridge-on-wheels dumped on the villa’s forecourt. His spoken English was impeccable as he politely explained that we couldn’t leave the van there, as he was expecting another group to arrive very shortly.

And the holiday began.