Another Piece In Our Journeying Jigsaw 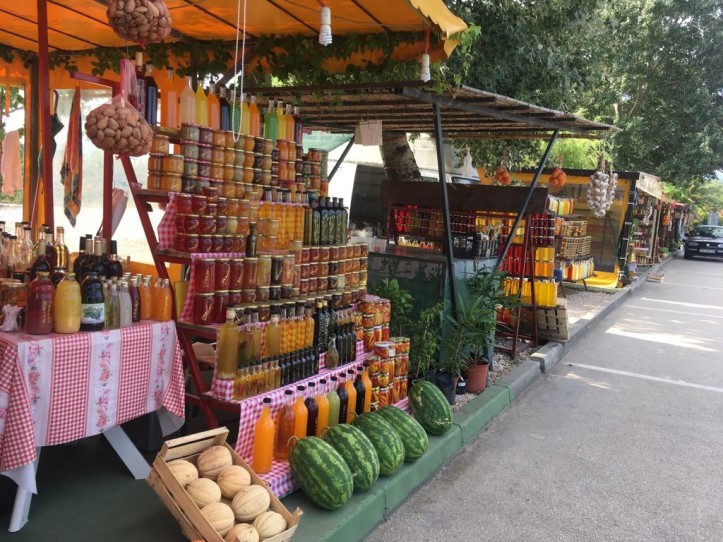 Yes, apologies (again) because this piece doesn’t fit chronologically with what’s preceded it – but it needed to be included as it provides the last piece in the jigsaw which completes our outward journey from Lich Vegas, Staffordshire to Montenegro in Adriatic Eastern Europe.

We’d left the waterfalls of Krka National Park behind us and returned to the Croatian coast at Sibenik from where we headed for Split, which we bypassed along with a lot of Friday-afternoon traffic. We enjoyed a brief hooted altercation with a crazy woman, clearly driving her husband’s Mercedes as she was obviously incapable of doing so effectively (and that’s about the most offensive thing I can think of to describe her outlandish manoeuvres on this rush-hour busy road) and she seemed determined to get the most out of her vehicle’s horn, so our humble Knumptywagen gave voice in return – and then some, much to the embarrassed disgust of the Onboard Map Reading Sat Nav Rune Reading Queen.

Our optimistic and impulsive arrival at a large family campsite on the outskirts of Split was greeted with the kind offer of a U-turn on their premises since they were smilingly fully-booked on this busy Friday afternoon. Further campsites were available about 30 km south, we were told. 30km? At this stage of our energetic day, that sounded a bit like the other side of the world, but off we dutifully set, to marvel at yet more incredible Croatian coastline. We kept our eyes open for any possible ‘wild’ camping spots, semi-aware that this wasn’t technically legal in Croatia, and fully-aware that the road existed to facilitate onward travel. As such, there were very few ‘off-road’ locations which would have been suitable anyway.

However, at a small settlement called Omis just beyond the amusingly named Dugi Rat, there was suddenly a rash of small ‘auto camps’, each adjacent to its neighbour and each clearly fronting the sea. We pulled into one which was dotted with shade-giving trees and a few motorhomes already resident, but as we ruminated about the best spot to choose, we noticed a beach-side pitch on the other side of the fence in the adjoining site. There was no sign of anyone who could have booked us in anyway, so out we went again, covering at least 10 metres of road before pulling in to the next site, where we simply helped ourselves to pitch number 6, right against the low wall which separated us from a narrow beach and the sea beyond.

Delight! From a narrow and inhospitably small boiler room which clearly doubled as the site office, there emerged a young man who booked us in, took our passport details plus 18 euros fee and then promptly left us to fend for ourselves, since four very enthusiastic Polish lads had just rolled in, popping small ‘pup’ tents out of a crammed people-carrier almost before their wheels had come to a stop. Before we’d even got our levelling ramps out, their camp was set up around a small table, which flexed (as campsite tables tend to do) under the weight, volume and variety of Tinned Beers Of The World (but probably mostly Of Poland.)

A walk along the water’s edge, a swim (for at least one of us) and an in-van dinner of pork-loin with shallots, served with a very agreeable pasta, rocket & cream-cheese accompaniment, inspired by the Ready-Steady-Cook School of Culinary Masterclasses. The distance of our view out to sea was again impeded by the presence of Otok Brac, an offshore island beyond which, as dusk fell, it became apparent that a huge – and so far eerily silent – storm was raging out to sea. The sky darkened prematurely as we tried unsuccessfully to photograph both the sheet and forked lightning which silhouetted the island and illuminated the distant sky with an impressive display of nature’s wrath.

We had retired to our bed by the time the storm arrived on our own shore, delivering torrential rain which hammered onto the acoustically-tuned van roof. Overwhelmingly loud thunder accompanied this percussive attack directly overhead and spectacular lightning now illuminated the quickly-flooding campsite – as well as the poor sodden Polish pup tents. 4:00am saw us struggling to fully close the van’s windows and roof-vents as a wild wind whipped in to complete the performance and then everything abated, seemingly instantaneously. The water-logged campsite had drained itself before we were back in bed and the following morning there was little evidence of the maelstrom that we’d lived through. The Poles’ pup tents were drying on an improved washing-line while they were already drinking on the beach and testing the temperature of the sea by simply wrestling each other into it.

Onwards. Off we went back onto the coast road which shortly led us inland into a fascinating, very wide and very flat arable region, where a large river formed the spine to many branching veins, all clearly canalised to provide irrigation for a patchwork of different crops, including trees, shrubs and indeterminate ground-level plants. A long 5-km sweep of road took us through and around this magnificent arable floodplain, which ended in a run of roadside stalls at Opuzen, each displaying a vibrant paint box of coloured vegetables, fruits, melons and bottled products, all racked and displayed for our delectation as we sailed past. We did in fact stop, taste and purchase an array of products, much to our and the sale-lady’s delight as we gallantly parted with about 15 quid for salad. Waitrose would have been far cheaper in comparison, but apparently that wasn’t the point.

Over the mountains and out of the Fruit Bowl heading for Dubrovnik, which we planned to visit fully on the return leg so we passed swiftly through, with only a minor diversion to the much publicised Camp Solitudo, where we enquired about booking for the following Sunday. A smiling assistant pointed us to a site-plan on the wall, which demonstrated exactly how vast the camp was, and explained we had no need to pre-book as he had plenty of space. Apart from the sheer scale of the place, it further transpired that Camp Solitudo’s was not only expansive but also the most expensive campsite in all of Croatia. Needless to say, we found a contrasting overnight location on our return journey, which provided both the most disturbed night and early-start of the whole trip.

Cavtat had been earmarked as our next port-of-call, but as we wound our way down into the town itself, it became apparent that motorhomes weren’t favoured here, as explained by the quayside car-park attendant who wanted the equivalent of 70 euros for us to park for 2 hours. Another swift abuse of a turning-circle and off back up the hairpin bends, through the modern hotel belt and back onto the main road again.

It was at this stage that Chief Navigating Campsite Procurement Officer revealed she had cunningly already prepared a Plan B and promptly directed us towards another lesser-known coastal village which, I’m ashamed to say, I’m minded not to name in print, as when we reached it, it was very quietly charming, unspoilt, non-touristy and therefore quite idyllic. A small campsite revealed itself, into which we pulled, impressing a resident German as we parked the Knumptywagen (unknowingly) with just a couple of inches roof clearance beneath a large, metal framed and vine-clad shade-shelter. Our view of a small, enclosed bay with an array of small boats bobbing at anchor reminded us of both Borth-y-Gest, near Portmadoc in Wales and a delightful place called Oyster Bay on the west coast of Ireland. So entranced were we at the location, the view and our good fortune that we failed to notice British numberplates on an adjacent van, so were taken aback to be warmly greeted in our own language and were soon engaged in typical campsite chit-chat with Jill and Ken, our new neighbours.

We enjoyed a quick wander around the functionally pretty harbour to get the lie of the land, after which the Chief Navigator took her snorkel into the sea, as is her newly-acquired custom on these occasions. Sitting out admiring the view was soon followed by a saunter up to the local, recommended (and apparently only) restaurant within walking distance. No booking? No problem, explained the Patron, hulking an extra table from we-know-not-where and plonking it down on the patio. An hour may need to elapse before we could eat, he explained, but have a drink while you wait, please. So we did. An unlabelled litre bottle of house-red appeared and, true to his word, our amazing seafood platter for two arrived an hour later, by which time we were completely pissed. (Not strictly true but you needed a bit of light relief – it can be heavy going, this plain reportage.)

A memorable meal, a stunning location, a dash back to the van pre-main-course for the anti-mosquito spray and then some voluble and amusing chat with another British couple – Adelaide & Alan (hello again if you’re reading this!) on the next table, eventually walking each other home and promising to be friends forever.

The following morning we arose early and bought a boat.

Well, a canoe. Oh, OK, an inflatable single-seater canoe with all the trimmings. An impulse purchase, being sold by a Belgian gentleman whose perfect English allowed for a spot of good-natured negotiation before we handed over hard cash; pulled the plugs on his under-used vessel; stuffed it into the van and set off with mounting anticipation for the final leg of our journey to Montenegro.